A company which uses plastic waste to surface roads has opened its first factory in Dumfries and Galloway.

The MacRebur plant in Lockerbie will take rubbish which would have gone to landfill to help produce asphalt. 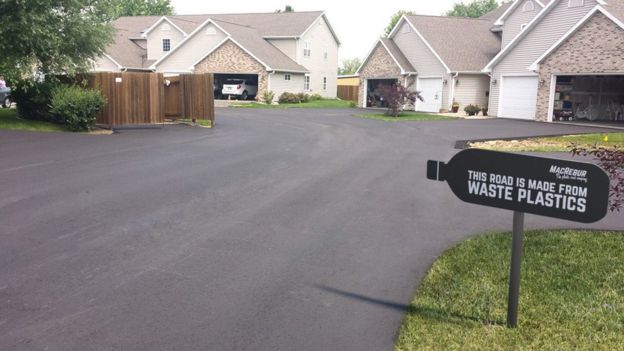 The granules are mixed with an activator to make the plastic bind and it is then bagged ready to be distributed to asphalt producers.

The company said its mix allowed the bitumen used in the production of asphalt to be extended and enhanced, reducing the amount of fossil fuel used.

If the company’s claims are right about the robustness of its product, plastic roads could be a game changer.

We all know what a nuisance potholes can be. If we can reduce them while putting waste plastic to good use it’s a double whammy.

Conventional roads use crude oil to make bitumen which binds the rocks, limestone and sand. This new process replaces some of that oil with plastic. And there’s apparently a “secret ingredient” in there too.

MacRebur say they are also working with Tesco to fix some of their car parks. And they have just agreed a £1.6m deal with the Department of Transport to test the technology in Cumbria.

“Our technology also means there are no plastic micro beads present in the mix and we can even recycle the road at the end of its lifespan, creating a circular economy that is sustainable and cost effective.”

MacRebur roads have already been laid around the world from Australia to Yorkshire using plastic waste processed by waste companies.

The new factory, which has created 12 jobs, brings the processing in-house with the hope of building further factories across Europe.

What is an Air Source Heat Pump ? Video from Energy Savings Trust

We are accredited with a number of codes, practises and are also partnered with reputable companies within the renewable energy sector

Let us help you on your renewable energy journey